Review PowerBook G3/300 – Back To History

The PowerBook G3/300, which represents the high end of the portable line, is the only Apple notebook bundled with a DVD-ROM drive and an MPEG PC Card, both of which are needed to run DVD movies. If you have a different PowerBook G3 model, you’ll need to buy a DVD kit for movie playback, and none were available as we went to press, even though one is on Apple’s price list for $499. Due to supply constraints, Apple suspended the build-to-order option for PowerBooks at least until October, but the company says it does not plan to offer the DVD kit separately at that time. Once the kit ultimately does become available, it will work with all PowerBook G3 models introduced since last May–as long as they have an active-matrix display. (Passive-matrix screens can’t properly support DVD due to their lower refresh rates.) 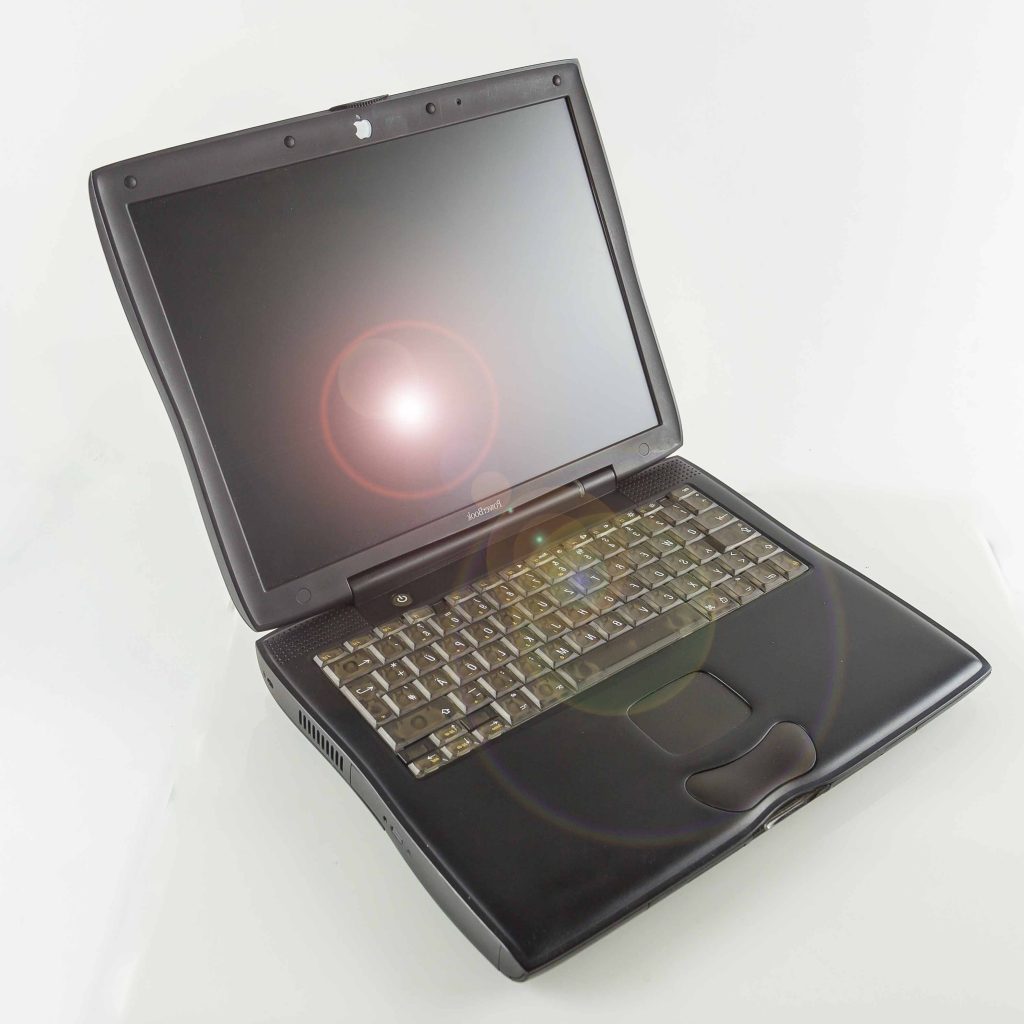 Luckily, this PowerBook configuration is an exceptionally good value: a 300MHz PowerPC G3 with a 1MB backside cache; an 8GB hard drive; 64MB of RAM; 4MB of SDRAM for video; and, of course, the DVD-ROM drive and MPEG PC Card–all for $4,999. Compare this with the same configuration of the 292MHz G3 portable that this machine replaces, which cost $600 more and didn’t include the DVD kit.

You also get a super sharp, 14.1-inch, color, active-matrix screen, which will now be standard equipment on all new PowerBook models except for one under-$2,000 “value” configuration with a 12-inch passive-matrix screen. (Apple has also boosted performance on the low end of the line by adding a much needed 512K backside cache to the 233MHz PowerBook G3.)
As for the DVD capability, you have to see it to believe how great a movie can look played back full screen on the PowerBook’s active-matrix display. Video purists may find fault in the modest pixel interpolation required to take native DVD resolution up to the PowerBook’s full 1,024-by-768-pixel display, but you always have the option of shrinking the image down to 720 by 480 pixels.

Of course, playing a movie won’t do you much good if the battery runs out during the cliffhanger, which might happen if you don’t manage your power wisely. In tests where virtual memory was on and the hard disk stayed spinning, battery life fell short of 11/2 hours. But with virtual memory off, we could eke out two hours, enough for most full-length movies. However, we noticed occasional video stuttering as the hard drive accessed vital routines.

One solution to the power drain would be to put the laptop to sleep and pop in a fresh battery, but this doesn’t work because the Apple DVD Player quits if you invoke the sleep option. Luckily, the DVD software lets you jump directly to a scene, so you can get pretty close to where you left off, should you need to switch batteries. However, this works only if the DVD title supports scene selection.

Despite the inability to put a movie to sleep, Apple’s DVD software is easy to use and supports all major DVD features, including subtitles and second audio-program tracks.

The PowerBook G3/300 also supports resolution switching, another standard feature on new Apple laptops. Instead of being locked into the single 1,024-by-768-pixel resolution of the previous G3 PowerBook models, the new portables can reset the built-in display to 800-by-600 or even 640-by-480 resolution. However, the PowerBook’s antialiasing (pixel smoothing) is fairly primitive and leaves images at these lower resolutions looking somewhat out of focus. Whatever you do, don’t combine lower resolutions with DVD video–the results aren’t pretty.
We saved CPU performance for last because it is the least-interesting improvement on this model. While Apple kicked up the processor speed from 292MHz to 300MHz, it reduced the bus speed from 83MHz to 66MHz. The result is largely a performance wash (see “Faster by a Nose”).
A couple of other nice performance tweaks: as on the iMac, Apple has added support for the V.90 protocol to the modem built into all new PowerBooks. In our tests, the modem could more consistently make faster connections than could older modems following the K56flex protocol. (Apple plans to offer a software patch for download from its Web site so you can upgrade older modems to V.90.) Apple has also added ATI’s latest low-power 3-D-acceleration chip set, Rage LT Pro. This, combined with the built-in 4MB of video RAM, makes for pretty snappy portable game play.

Being a mobile-computing aficionado and a movie buff who’s already invested heavily in the DVD format, this reviewer greeted the arrival of the new DVD-equipped PowerBook with a mixture of joy and chagrin. Joy, because no product could be better suited to his travel needs than a DVD theater that fits in a briefcase. Chagrin, because like any good PowerBook fanatic, he had already bought a high-end PowerBook without DVD.
However, sore feelings aside, the new PowerBook is a good step forward for a product that was already at the top of its class in price and performance. For some high-end users, the DVD alone will justify buying a new PowerBook G3/300 and passing your DVD-less notebook down the company food chain.