Yes, this is the non-official version of the best selling computer game “Doom”. It comes with several levels and is just what you want in a game like this…

Lots of monsters and men with guns who are all after you…you have to be fast and clever just to survive longer than a few minutes. This isn’t an easy game to play.

It says it is the free version but it really is the version that is supposed to get you to buy the original commercial version. You will want to after playing all the levels in official version. All you have to do is set up a virtual machine, install the original game of Mac on it that you need, and then you can run the game in that environment.

It supports network play….so you can play with or against others rather than just the computer.

This is an classic multi-platform game. “Legends speak of a Colossal Cave that extends deep underground, so twisted by time that its passages shift like the sand under which it lies… the Cave is said to be filled with fabulous treasures, but also incredible danger!”

Spelunky is a cave exploration game from classic platform games and rogue likes, where the goal is to grab as much treasure from the cave as possible. Every time you play the cave’s layout will be different. Use your wits, your reflexes, and the items available to you to survive and go ever deeper! Perhaps at the end you may find what you’re looking for. Spelunky can be worked for both Windows and Mac OS X.

Shotgun FunFun is a good action game in which you have to shoot as many zombies as you can. It’s dumb fun, but definitely fun. 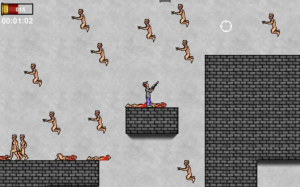